Update on the Conan Stone

The Conan Stone, a Pictish symbol stone which was discovered in February 2019, was recently conserved in 2020 with financial support from SSNS. This is a report on the stone’s finding and conservation, and its role in its new home at Dingwall Museum. 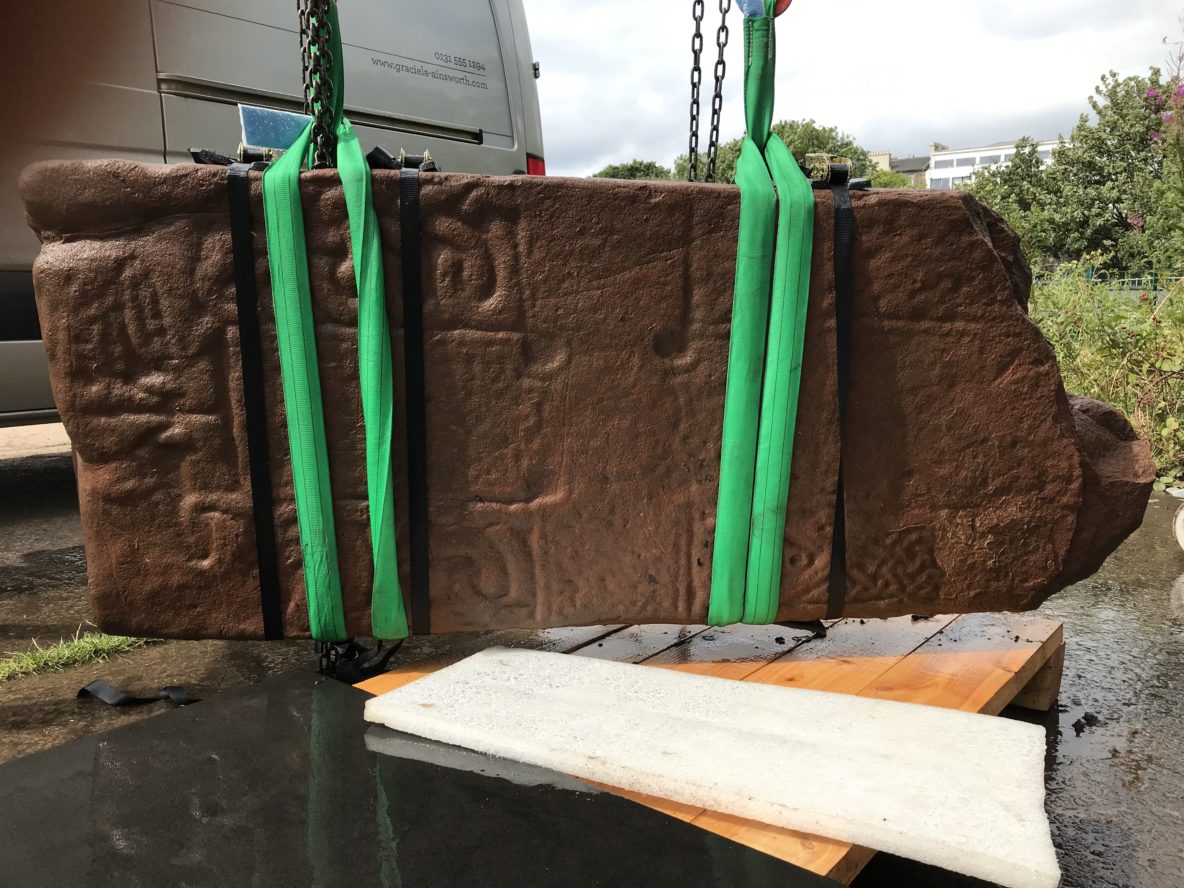 In February 2019, a member of NOSAS (North of Scotland Archaeological Society), Anne MacInnes, was exploring an old neglected burial ground that she had become aware of, just south of Conan Bridge. Anne does graveyard surveys and, as Wester Logie had never been surveyed, she and a colleague were working their way round the stones, recording the memorial inscriptions and the artwork. Many of the stones were lying on or in the ground, almost hidden. Anne still remembers clearing the leaves from one stone that was just showing by an edge and seeing what she knew immediately to be a Pictish figure inscribed on the stone, although she couldn’t quite believe it. She and her colleague cleared some more of the stone and more Pictish symbols appeared. She covered it all up, called some colleagues who came and confirmed that she had indeed found a new Pictish symbol stone. 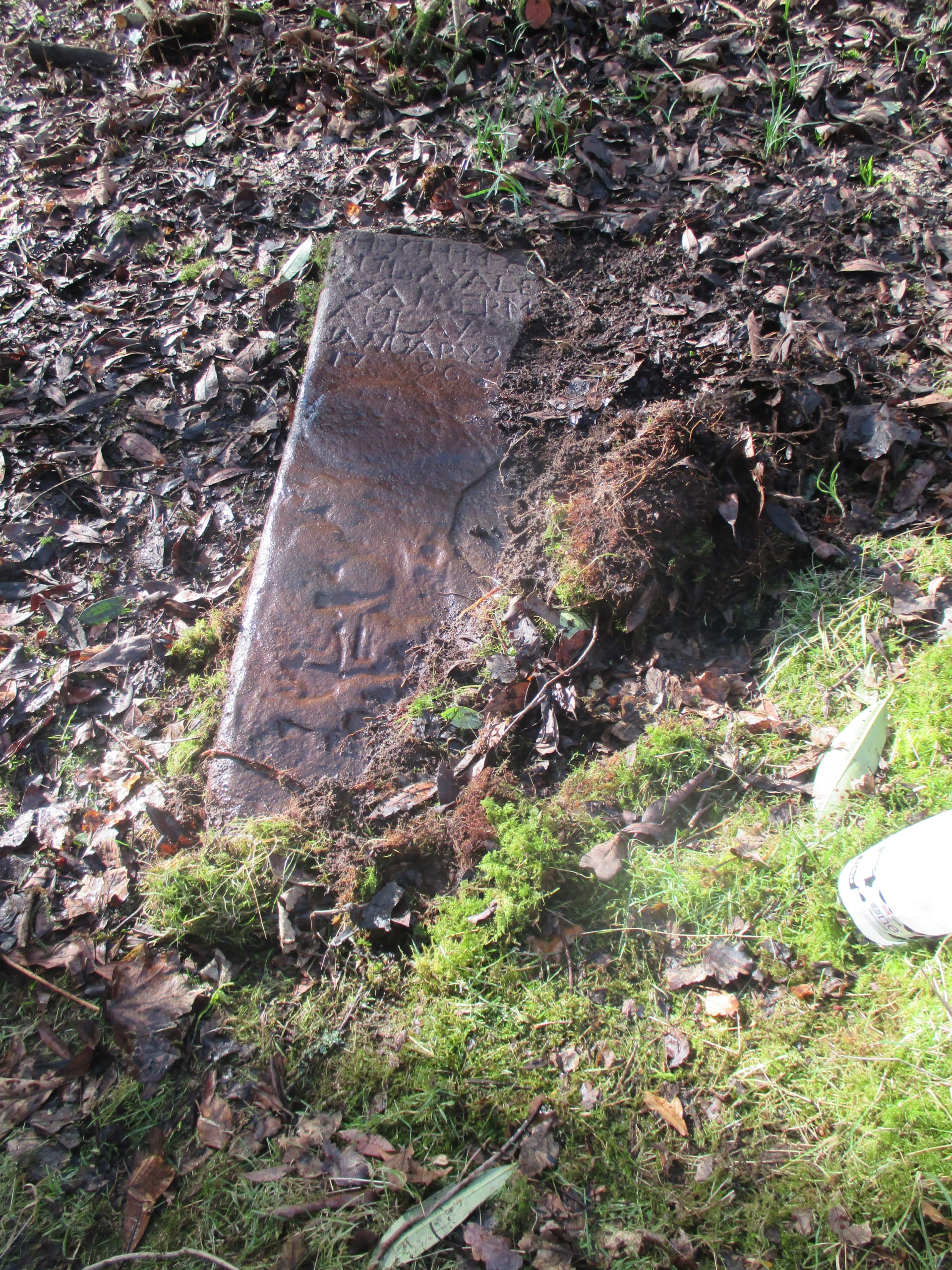 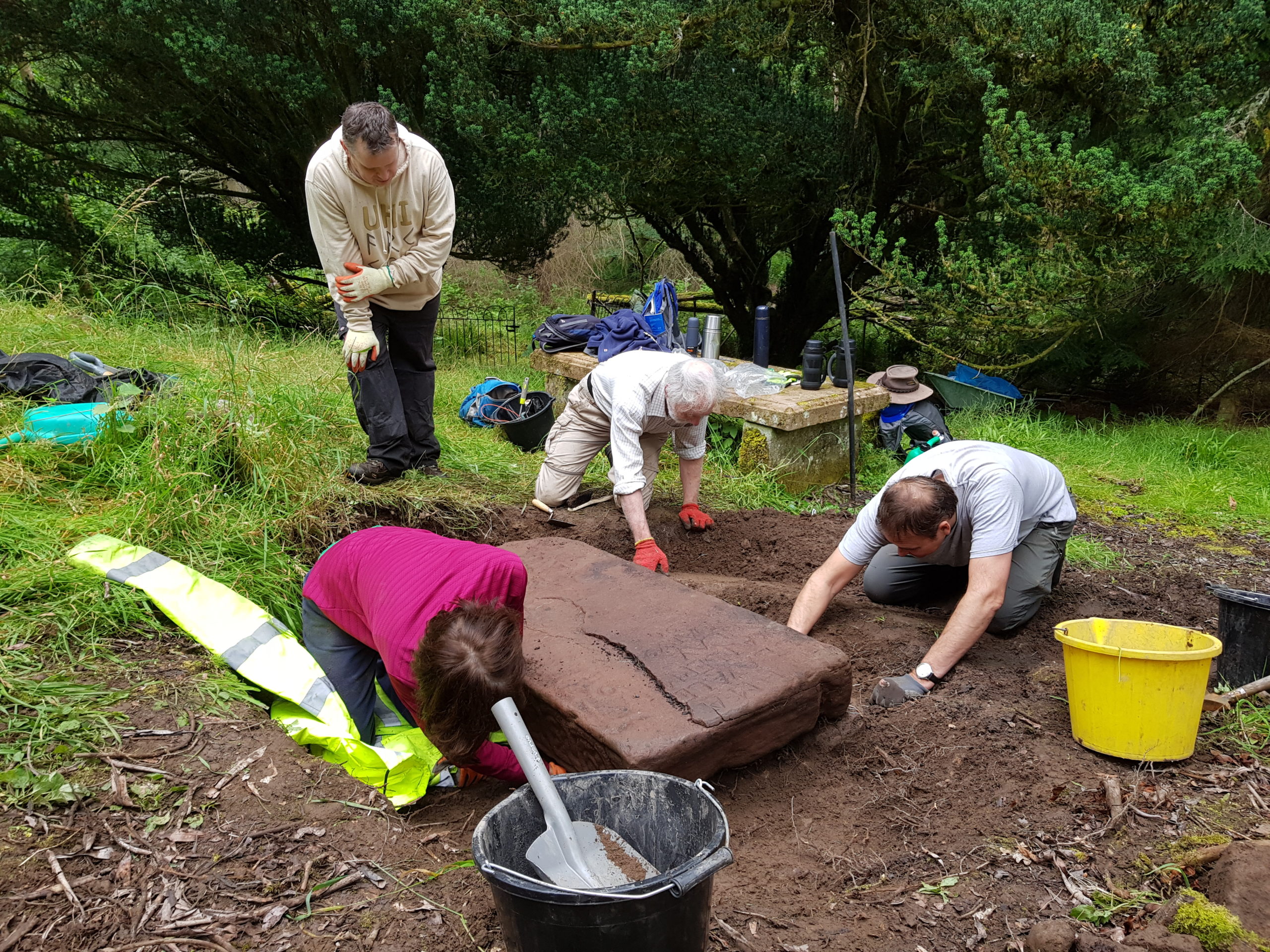 Clearing around the stone. © NOSAS 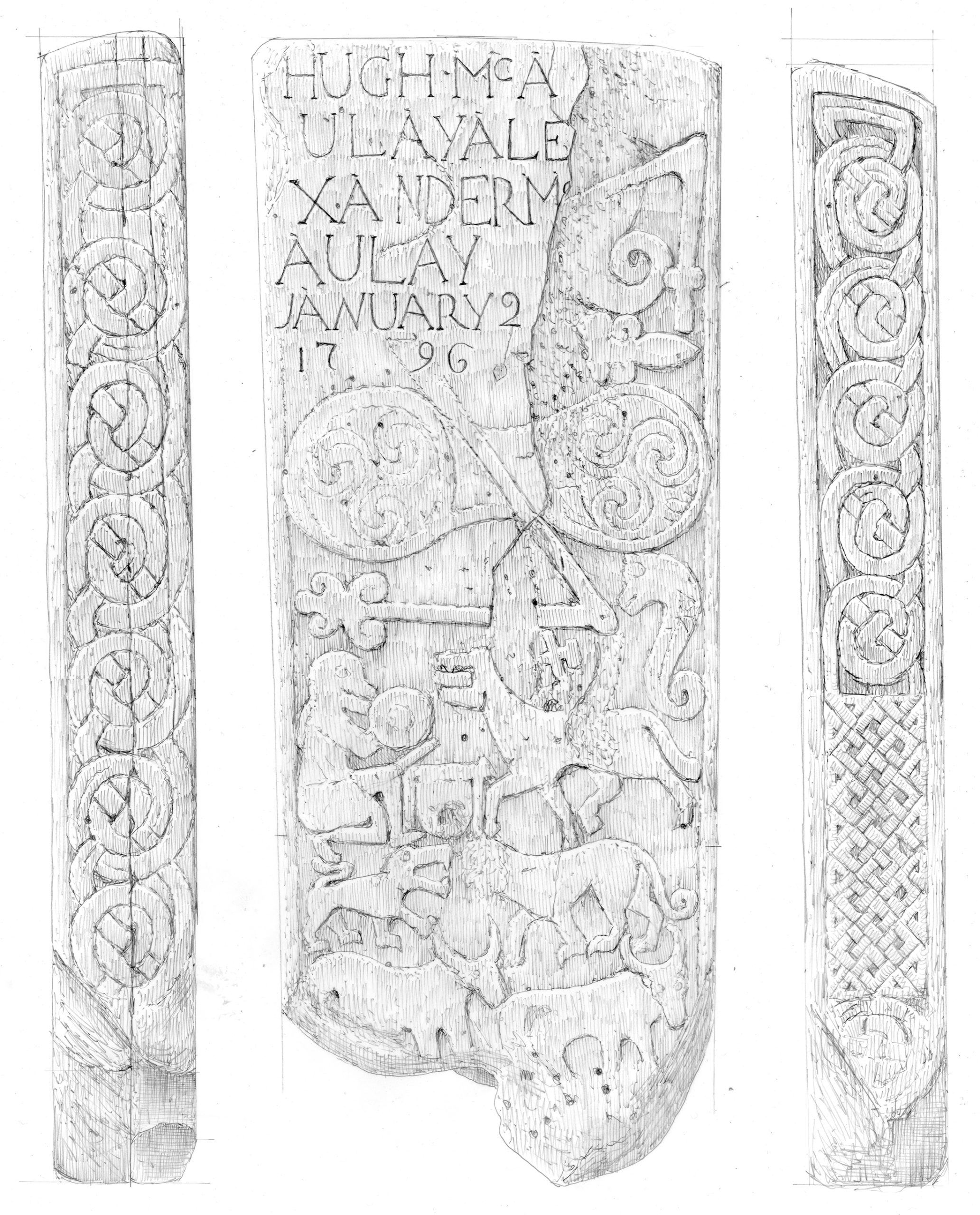 A drawing of the stone whilst still in the ground. © Historic Environment Scotland

To cut a long story short, after much discussion with Historic Environment Scotland, Highland Council, and Treasure Trove Scotland, it became clear that somebody or some organisation would need to take responsibility for managing this stunning new find of Pictish artwork, as those organisations were unable to. NOSAS agreed to do this. A subcommittee was formed which identified the tasks ahead: remove the stone to a place of safety, liaise with both national and local organisations with an interest in the stone, raise the money to restore it, and then see it mounted in Dingwall Museum, whilst managing the various workmen who would be contributing to the work in the Museum, etc. Although that ended up being a lot of work, the goal of seeing this new stone erected in the museum kept us going.

NOSAS and the Pictish Arts Society (PAS) put up the money to get the stone transferred safely to one of Scotland’s premier stone conservators, Graciela Ainsworth in Leith. Then we could relax. Only when it was safe could we announce the find to the world. Although we knew what one face of the stone looked like, we wondered whether the face still in the ground contained a cross, like many other of the other Pictish cross slabs in the area. There was a wonderful moment when we received a photo from Graciela showing the stone being removed by a crane from the van, with a decorated cross clearly visible on what had been the underside. Yes! 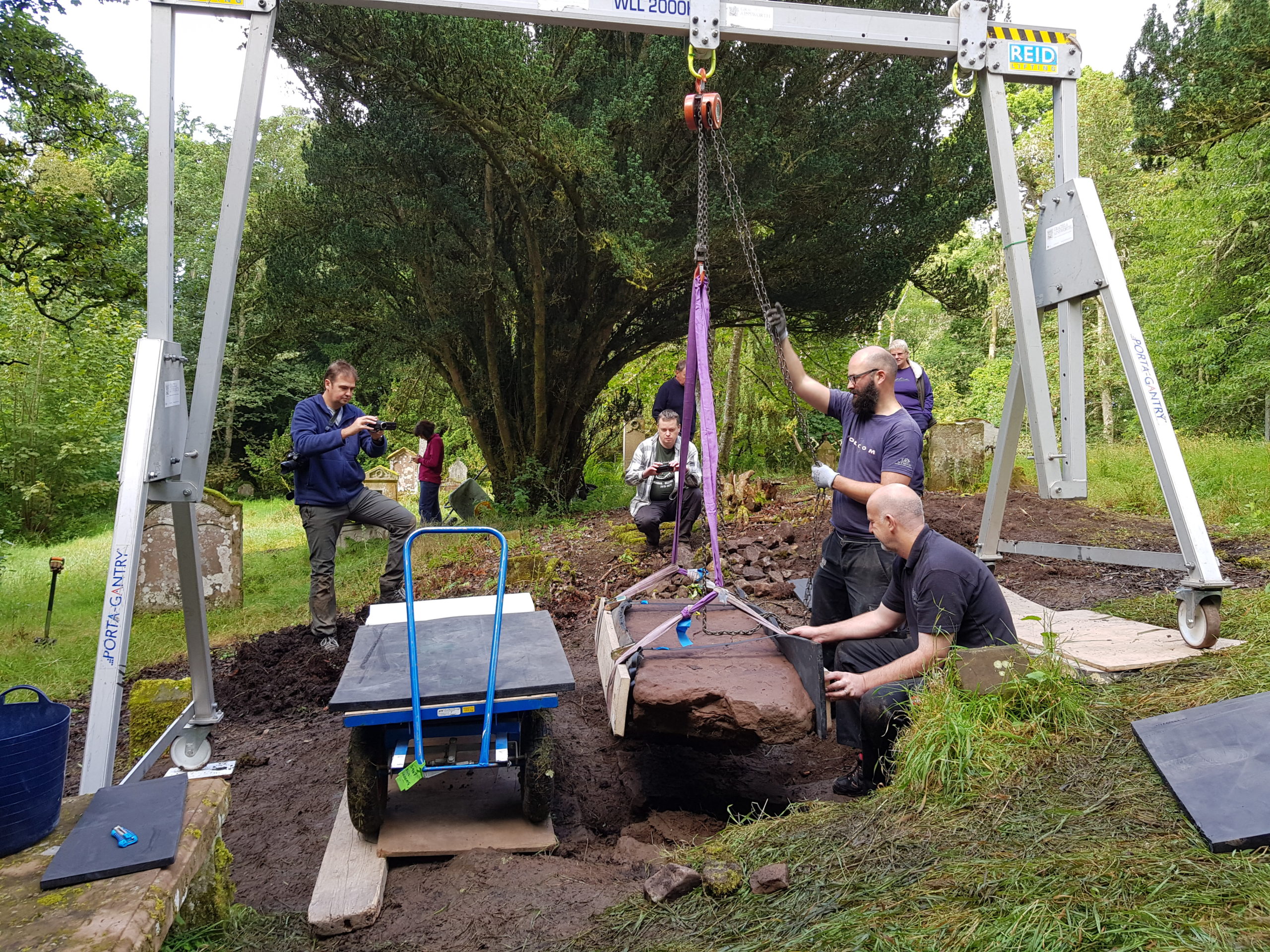 The delicate process of lifting the stone. © NOSAS 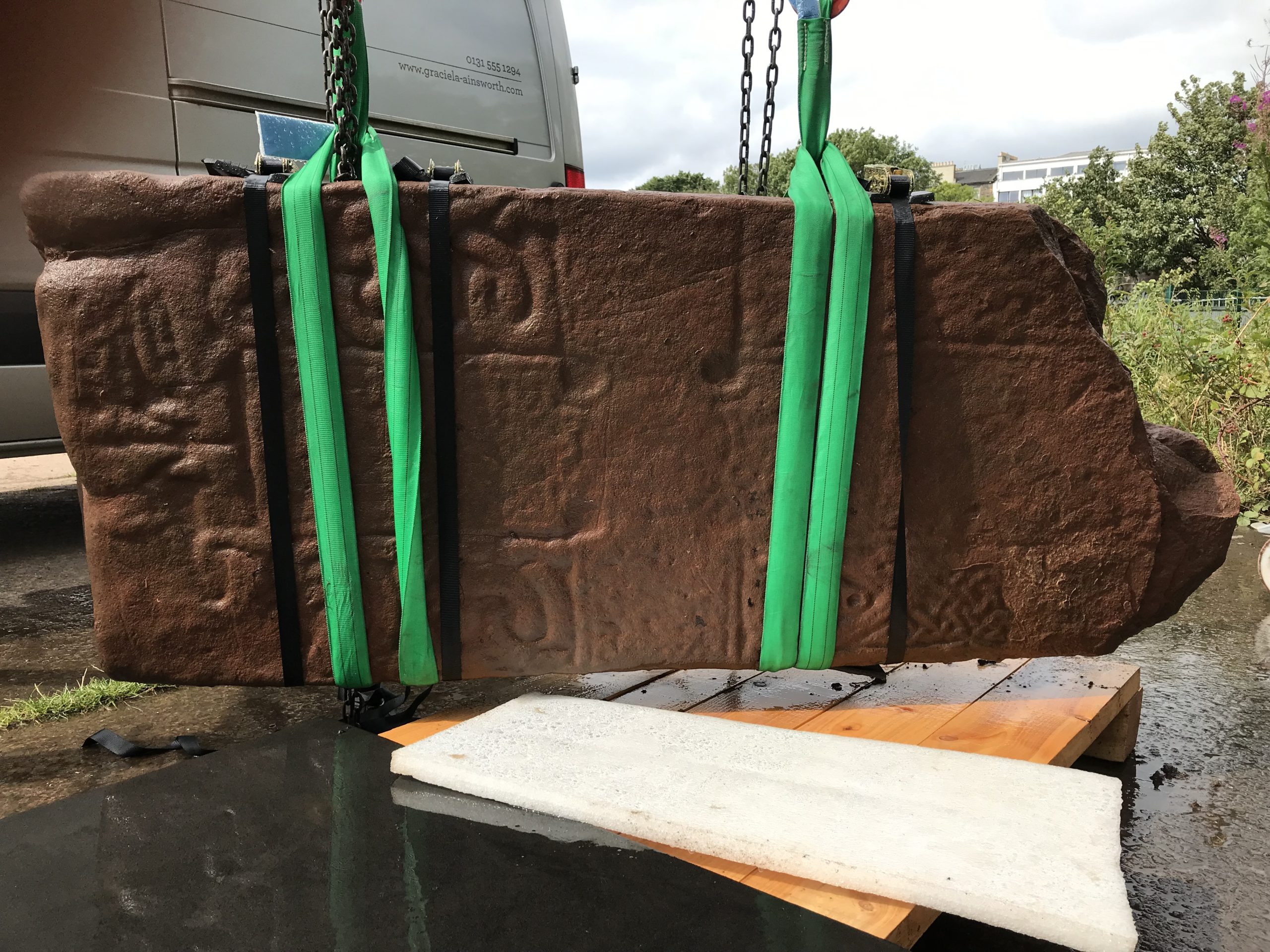 The stone arriving at the conservators. © Graciela Ainsworth

On 23 August 2019, we released the news of the find in a coordinated way with PAS and a press release. Our Facebook post that day ultimately reached 335,333 people, representing a staggering level of interest. The press release led to television and radio interviews. We then started a fund-raising campaign, jointly with PAS, using the JustGiving website, our Facebook page and other social media outlets. We applied for grants to Historic Environment Scotland, Highland Council Ward Discretionary Fund, the government’s Town Support Fund, and a few others. We also started local fundraising in the Dingwall area, visiting schools, the museum, and local events. Some of the contributions came completely out of the blue. In the end, after much hard work, the money was raised and we could move to the next phase. Once we knew we could pay the bills, we put the conservation and repair work out to tender, which Graciela Ainsworth won. We had originally thought of putting the work in the museum out to tender too, but in the end decided we could probably manage this stage of the work by using local craftsmen and expertise, and project managing it ourselves. This was more time-consuming but a much cheaper option than awarding a tender to, say, a central belt company. It was also very satisfying to get to know some local tradesmen and to understand the goodwill they had towards ‘their’ museum.

Photo of the upper face, taken at the stone conservators. © Historic Environment Scotland

Photo of the lower face, taken at the stone conservators. © Historic Environment Scotland 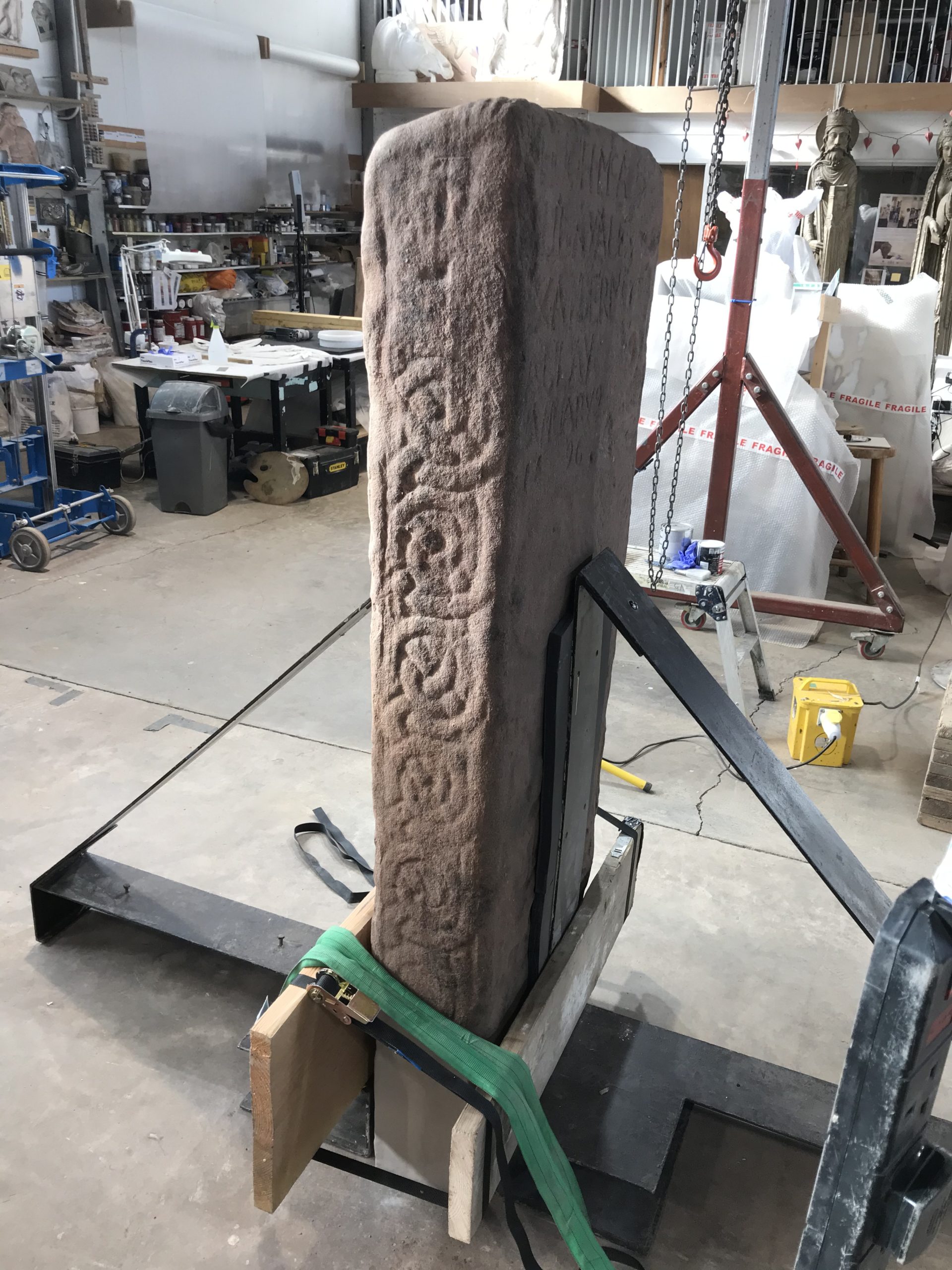 Before the coronavirus pandemic caused local and national restrictions, we had expected that the conserved stones would have been erected in place in the museum, ready for the museum opening for the season in early May. There was going to be a big unveiling ceremony one Friday evening, with a Pictish Conference in Inverness the weekend after. The Conference came about through an alliance between PAS, NOSAS, and the Scottish Society for Northern Studies (SSNS), one of the organisations that had given the project a substantial grant. All was cancelled, however, while we weathered the Covid-19 storm.

At the time of writing this account, end-October 2020, most of the work to upgrade the room at the museum has been done, although the delicate manoeuvre of erecting the stone on its plinth will happen in the coming week. We await that most delicate part of the work in the museum with bated breath. However, we expect all the work in the museum to have been completed by mid-November. Although the museum has been closed for all of 2020 because of Coronavirus restrictions, it may be possible for the museum to arrange an unveiling so that one side of the Stone at least will be visible through the windows of the museum during the winter. 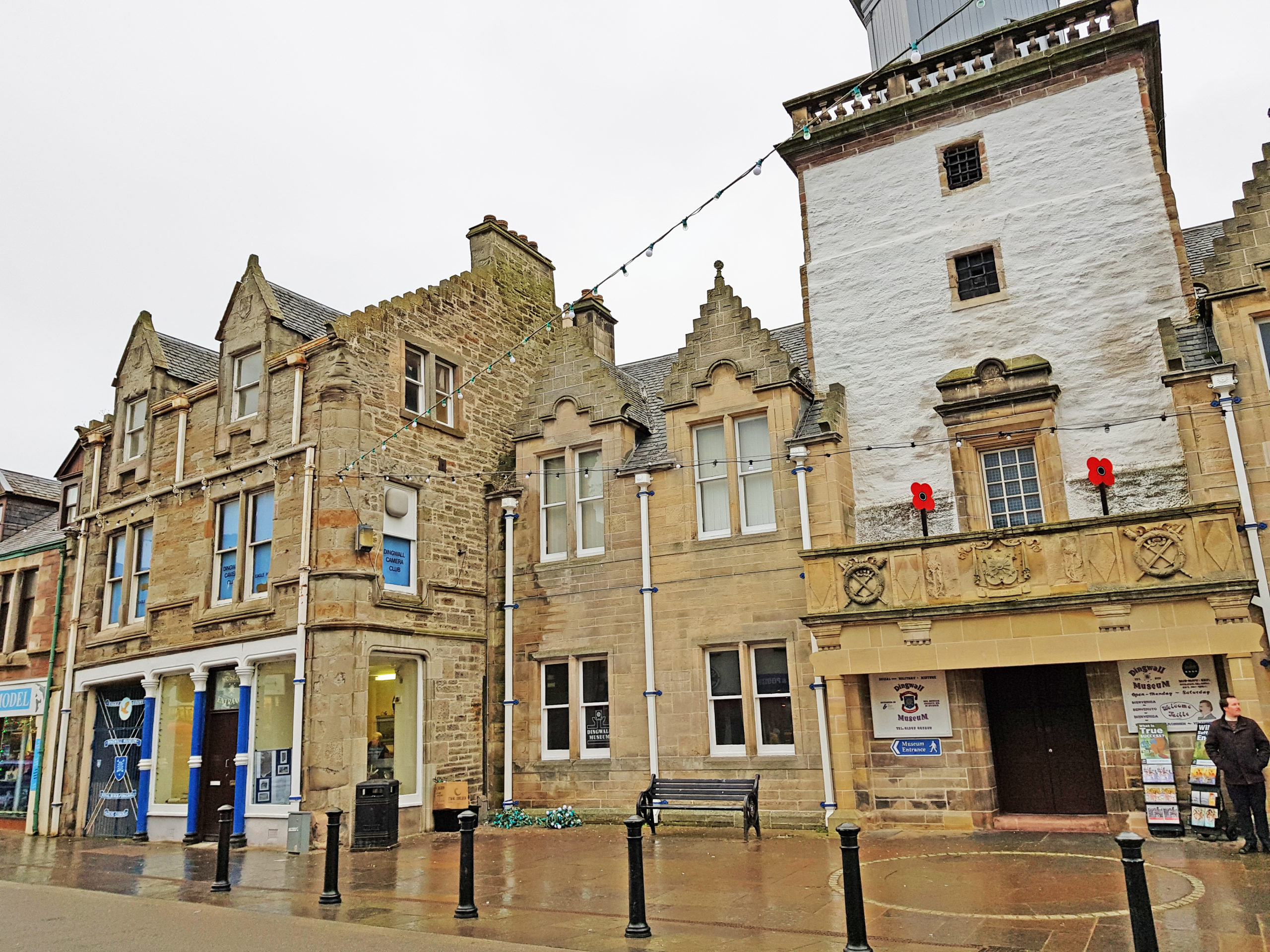 It was hard to imagine in those exciting but truly nerve-wracking days of late February the journey that the stone and NOSAS would embark on. There was initially great concern for the safety of the stone, discovered but vulnerable in the graveyard. Having accepted that we would take on the project, there was also great concern in NOSAS whether we would be able to raise the money required. So, there were two successive big sighs of relief when the stone was safely removed to Leith, and when the money had been raised. We have made so many human connections and new friends along the way, met some interesting and enthusiastic people, learnt new skills of project management and, most of the time, enjoyed the process. It has been time-consuming but, essentially, so worthwhile.

The above text was authored by Roland Spencer-Jones, Chair of the North of Scotland Archaeological Society (NOSAS).