Update on the Edinburgh Runestone

Edinburgh’s own eleventh-century Swedish runestone has recently undergone conservation and has been moved to its new location in George Square, a project supported and financed in part by SSNS. This is a brief update on the stone’s recent status, whereabouts, and future at the University of Edinburgh. 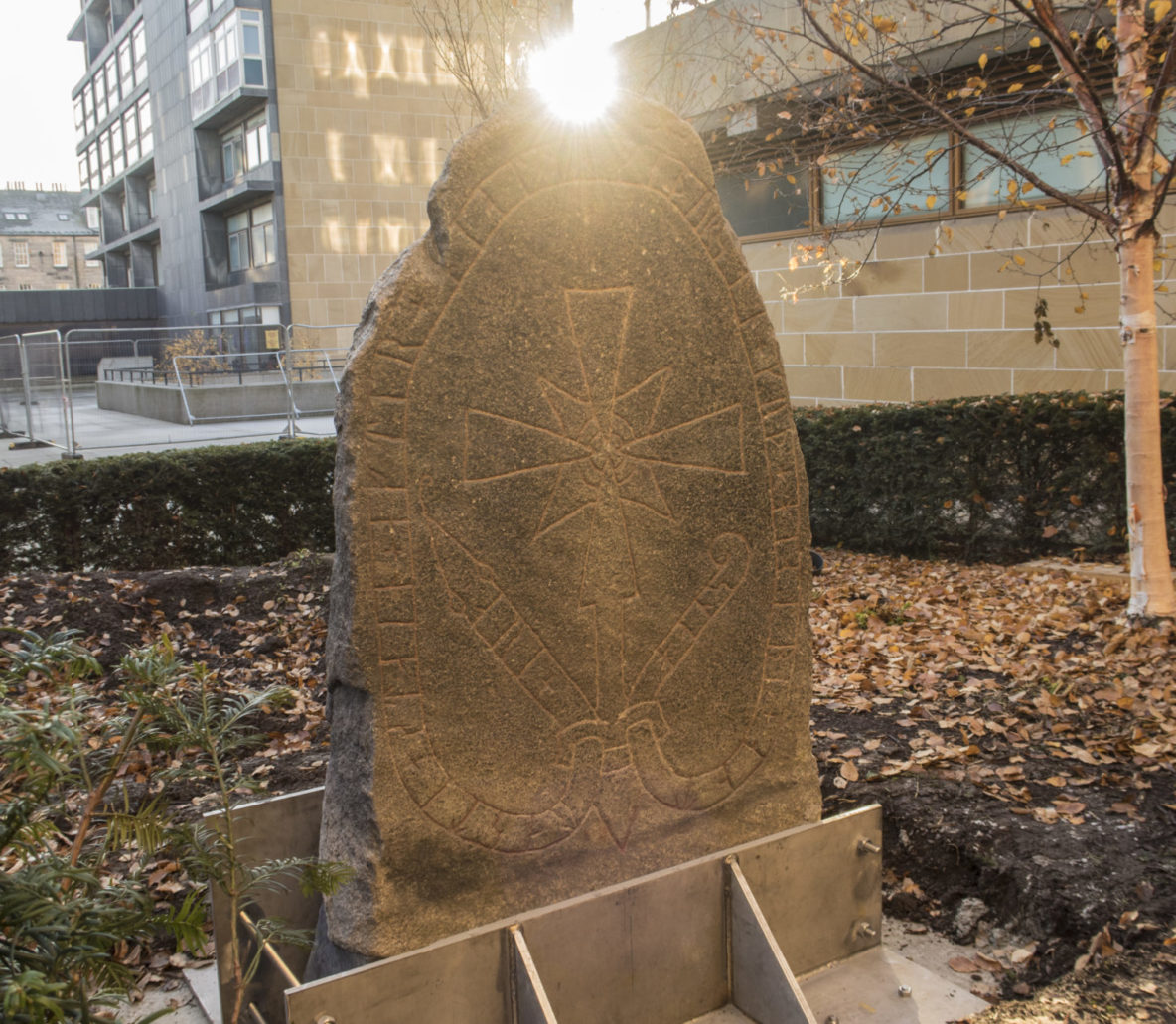 The Swedish runestone in Edinburgh (Canmore ID 52498, NT27SE 45) is a genuine, light-grey granite runestone, dating from the eleventh century (c. 1010-1050 AD), one of only three Swedish examples in Britain. The other two are on display in Oxford’s Ashmolean Museum (accession numbers AN1997.1 and AN1997.2). Originally from the farm at Lilla Ramsjö, Morgongåva (‘Morning Gift’), around 40 km to the west of Uppsala in Sweden, it was gifted to the Society of Antiquaries of Scotland in 1787 by Sir Alexander Seton of Preston and Ekolsund (né Baron, 1738-1828), adopted son of the owner of the estate (his uncle George Seton) on which it was located (Ballantyne 2005).

In 1821, the Society of Antiquaries of Scotland presented the stone to the Princes Street proprietors, who were looking to improve Princes Street Gardens, “which, being fully two tons in weight, was with difficulty transported to the Castle bank” (Robertson 1935, 21). There it stood, just below the parapet of the Castle Esplanade on the lip of a steep bank overlooking Princes Street and the Forth estuary in the distance, for the better part of two centuries.

In 2013, Eva Åkerman and Thorvaldur Arnason visited the Society and explained that the runestone had come from Eva’s family farm at Lilla Ramsjö. They explained that they wished to set up a fund in Sweden in memory of Eva’s father, Göran Åkerman, to raise money to provide better interpretation for the runestone. In 2014, Mats Köbin, also from Sweden, contacted the Director of the Society about the stone and a project to create a copy in Morgongåva. Mats had also set up a Facebook page for the stone.

The Heby project made it into the Edinburgh Evening newspaper, at which point several Edinburgh residents also approached the Society and asked if something could be done to improve the location or at least the interpretation for the runestone. In September 2014, a replica of U1173 was created by Kalle Dahlberg and erected in the village of Morgongåva, resplendent in all its colours. The inauguration was attended by children from the local primary school, with the new runestone also receiving a dash of mead! 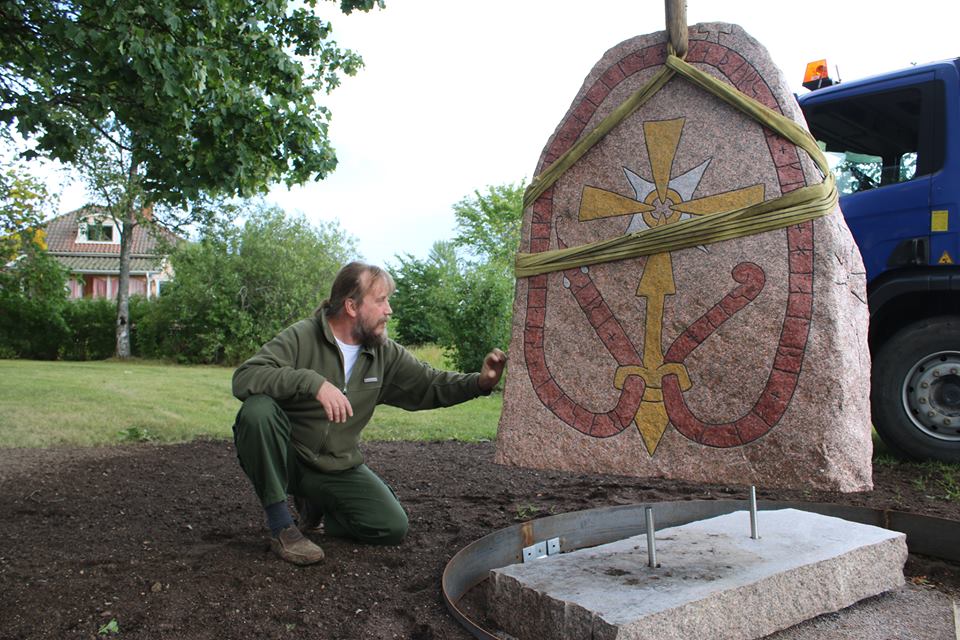 At this point, there was still some confusion regarding the ownership of the runestone in Edinburgh, which some considered to remain with the Society, despite the Conveyance of 1851 when the Society passed on its “entire collection of antiquities […] to the Board of manufactures on behalf of the public” and the recorded donation of the stone to the Princes Street Proprietors prior to that. The stone itself stood on City of Edinburgh Council land (reverted to the Town Council by Act of Parliament in 1876 from the Proprietors), albeit right on the edge of Historic Scotland-owned property relating to Edinburgh Castle. This land was used by Historic Scotland for the northern foundations of the stadium erected annually for the Edinburgh Tattoo, which now had a high security fence erected around it – likewise surrounding the runestone and thereby closing it to the public. The site was also within the nationally protected Scheduled Monument area for Edinburgh Castle, so any works would require Scheduled Monument Consent from the national heritage agency.

In November 2014, the Society convened a meeting between representatives of the City of Edinburgh Council (CEC), Historic Scotland, and others interested in the stone at the site itself. At this meeting the Society agreed to lead a collaborative programme of work to better understand, conserve, move, and display the monument and several new locations were discussed. The Society then set about raising funds for this project. In early 2017, after reporting on the aims in the Society Newsletter, an offer to locate the runestone at the University of Edinburgh was received from Alan Macniven, senior lecturer in Scandinavian Studies at the Department of European Languages and Cultures. The National Museums Scotland (NMS) also expressed an interest in acquiring the runestone for the national collection. As part of the project, the CEC determined that the runestone did indeed belong to them. The Society supported CEC colleagues in proposing the relocation project and transferring ownership of the stone to the NMS, which was agreed at the November 2017 meeting of the CEC Culture and Communities Committee (committee meeting minutes available here, click here for the relevant PDF). Around the same time, the NMS and University of Edinburgh were working on a loan agreement, and the first of several planned walking tours of Edinburgh to incorporate the runestone was successfully undertaken by Svend-Erik Engh, a professional storyteller from Denmark.

With funds finally secured, the Society applied for Scheduled Monument Consent in September 2017 to excavate and remove the runestone for a full conservation appraisal and any work required before relocating it to the University of Edinburgh. The application was granted with conditions at the end of November that year having been notified to Scottish Ministers. AOC Archaeology Group were contracted by the Society to carry out the excavation and prepare a conservation appraisal. Following a written scheme of investigation agreed with Historic Environment Scotland, the City of Edinburgh Council archaeologist, and NMS conservation colleagues, the runestone was removed from Princes Street Gardens by excavation in December 2017. This revealed the surprisingly shallow nature of its foundation, with the deepest part of the stone sitting only 44 cm below the surface, and even shallower at each edge. The stone was found to weigh 1.3 tonnes as it was carefully lifted and transported to the conservation laboratory of AOC Archaeology. 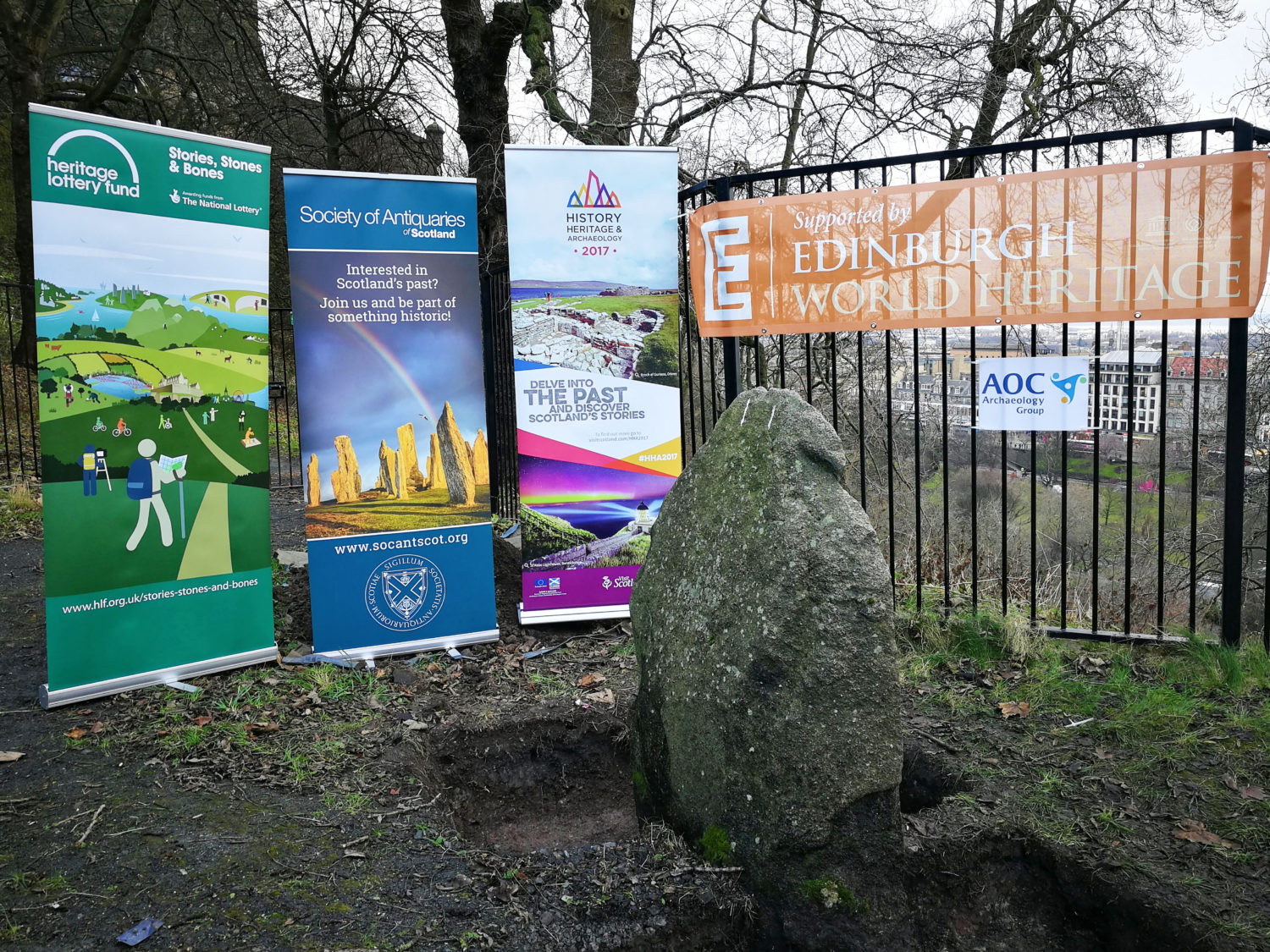 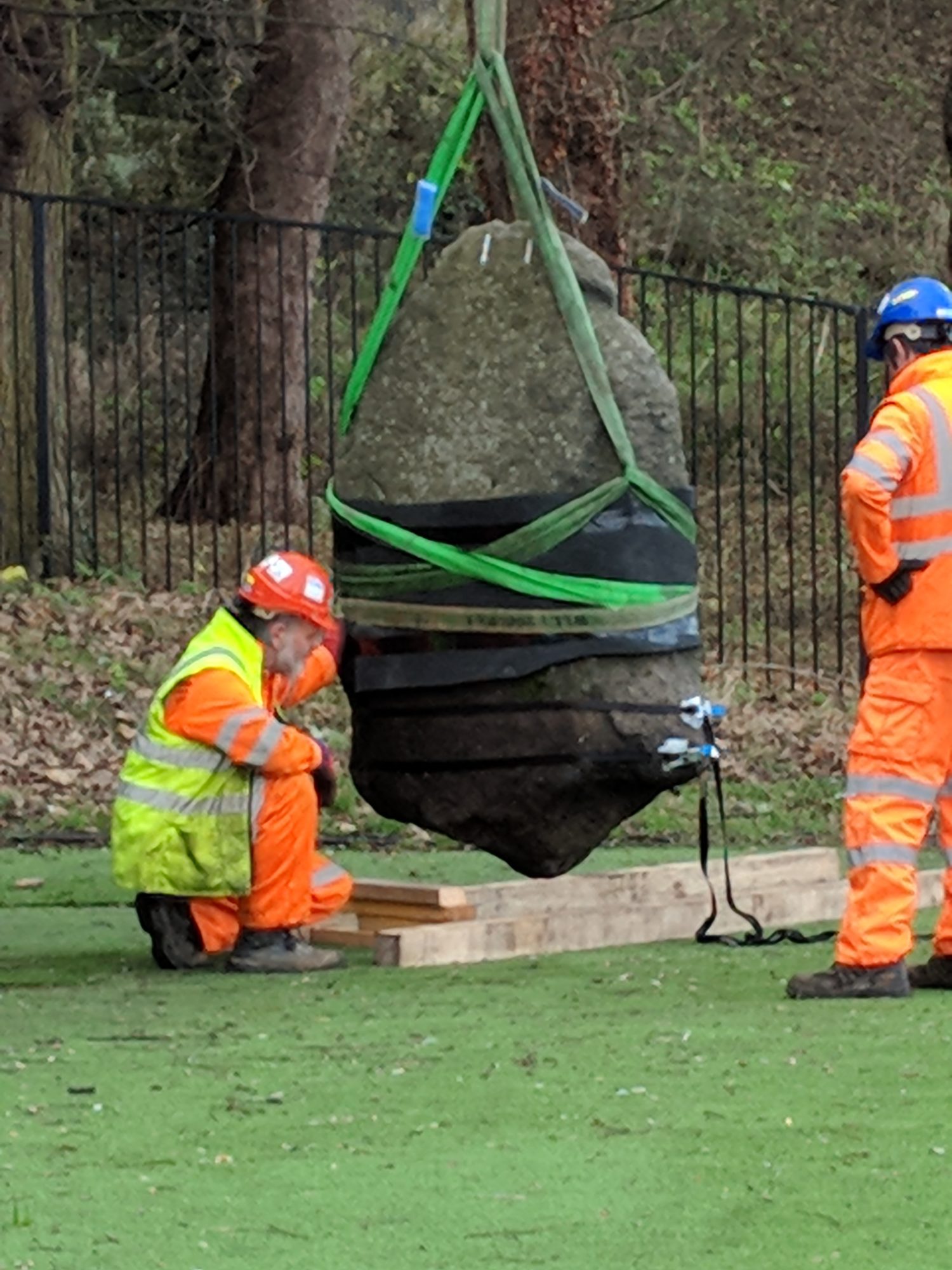 A conservation assessment early in 2018 determined that the stone did not appear to have undergone any recent maintenance and surfaces were soiled with bird guano, biological growth (moss), and dirt, as well as being blackened by particulate air pollution. Whilst these were detracting to the stone’s appearance, they are unlikely to cause any significant decay to the granite (Ashurst 2006: 168). However, as a cultural artefact, the clarity with which the runes can be read is highly significant and as such it is important that the stone is well maintained and cared for.

A crack was discovered which travels across the bottom corner of the runestone face (proper right-hand side), and soil was excavated from the crack to facilitate condition assessment. It measures c. 30 cm in length, 1.53 cm at deepest point and 1.83 cm at its widest point. The stone surrounding the crack is smooth and there is no indication that it is a result of recent damage or active decay. The crack appears to be a stable surface crevice and is likely to be a naturally occurring flaw which has always been present on the stone or could be a result of historic damage. When displayed in its previous location, this area of the stone was below ground level, which is likely to have kept it well supported. In addition, compaction of soil within the crack would have prevented water ingress and therefore reduced the risk of damage by freeze/thaw cycles.

The engraved runes are in good condition but were partially obscured by loosely bound surface debris and pollutant staining. Red paint remains within the rune engravings and formed an inconsistent layer that was obscured by surface soiling. Where visible the paint appeared well adhered to the stone’s surface and stable. It is thought that this paint was added in the twentieth century by a well-meaning Swedish antiquarian using paint from a local hardware store! In Sweden, the inscriptions on most stones are inked in, to make them more visible to visitors, and farmers driving tractors… (pers. comm. Alan Macniven). Conservation of the stone was undertaken by specialists Graciella Ainsworth Sculpture Conservation, and discussions ensued on how best to reinstate the runestone given the shallow depth of stone available below the lowest carvings. Eventually, in May 2019, a steel bracket system was agreed and specified by an engineer, alongside the specifications for a concrete plinth. The agreed new location, outside 50 George Square (School of Literatures, Languages and Cultures), is a quiet corner, easily accessible to anyone and with benches, CCTV, and University security patrols already in place. The carvings will face the building, protecting it from the worst of the elements. Transfer of title to the NMS has now been concluded, and the loan agreement with the University complete.

On the morning of 30 November 2019, the stone was installed, and as a result, the University of Edinburgh is home to a genuine eleventh-century Swedish runestone, on loan from the NMS, which can be appreciated by University staff and students, as well as the general public. It will form a fantastic resource for students of Scandinavian Studies, Archaeology, History, and Linguistics, and soon include a new interpretation board as well as dedicated web-based information.

The above text was composed by Dr Simon Gilmour, Director of the Society of Antiquaries of Scotland.